In Adam Gopnik’s excellent piece about Gillette razors and innovation in the New Yorker, he discusses the fact that each new generation of razors—Gillette’s latest, the Fusion, now has five blades and a “triple-A battery inside, which makes it vibrate delicately to no particular purpose, like an old electric football game” (probably the best simile I’ve read all year)—doesn’t seem to work any better than the previous one. 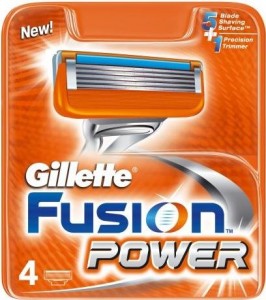 Am I just five times more likely to cut myself?

This Gopnik explains with what he calls the “Devil’s Theory of Innovation”: briefly, that “cutthroat…competition produces stasis,” and that “we are born to be inherently frivolous aesthetes, who like change for change’s sake.”

I am deeply sympathetic to this point of view. In fact, Gopnik’s piece reminded me of a long law-and-economics argument that I had seven or eight years ago with Yale Law professor (and erstwhile Microsoft consultant) George Priest on the same topic: Gillette’s farcical march of purported technological progress toward ever more blades. The argument happened over a lovely dinner of Connecticut River shad with roe that Professor Priest and his wife kindly hosted at their house for the Yale Law and Technology Society, a student organization that I was running at the time. (I don’t know if the organization’s still active, but the journal we started seems to still be running.)

My position was that the Mach 3 (which was the cutting edge—so to speak—at the time) was a classic case of a widespread and growing problem in consumer products industries: that companies were increasingly competing less on the merits, and more on their ability to capture a certain sort of emotional space in consumers’ brains—a limited quantity of space, I argued, and thus a zero-sum game. I claimed, among other things, that this state of things undermined the stated constitutional purpose of trademark law—to encourage innovation by protecting society’s signals of historical quality—and, along with the (already known) effects of price signaling, undermined most of then-current consumer behavior theory, too.

Professor Priest argued that no, three blades really were better than two, and if they weren’t, the new product wouldn’t gain traction, and my idea that consumers were just a bunch of idiotic copycats that had no idea how to judge substantive quality was condescending, deeply wrong, even offensive.

By the time the argument was over, Professor Priest had told me that he was planning on voting against my degree at the spring faculty meeting (I was a third-year at the time). I think he was only joking, but I’m not certain.

I’d like to think that what’s happened in consumer products industries in the past half-decade has illustrated my point more elegantly than I probably did: for instance, what’s happened with the luxury wine industry (e.g. Louis Vuïtton Moet Hennessy), which I discuss in The Wine Trials (in blind tastings of more than 500 consumers, we proved that people actually preferred cheaper wines to more expensive wines).

I’d submit that more categories of consumer products than we want to admit are now functioning like fashion or cosmetics goods, succeeding or failing on the virtue of good or bad buzz, a good or bad aesthetic of change, rather than on the underlying merits of the product.

Professor Priest, if you’re reading this, I invite you to comment: do you still stick to your guns?

For my part, what I believed then, I believe doubly now: that the marketing and advertising departments of companies—and companies to which those functions are outsourced—are no longer involved (if they ever were) in their purported business: to disseminate information to consumers. Rather, they’re just participating in a social/emotional arms race at the expense of consumers, spending more and more money on creating the same exact sorts of good feelings that we would have once got from, say, merely owning a razor. Marketing and advertising are deadweight losses. I would go so far as to suggest that the federal government limit corporate tax deductions for marketing expenditures.

What’s missing, perhaps, from Gopnik’s article is a discussion of the placebo effect—the notion that the Fusion might actually feel better on our skin on a sensory level merely because we’re told it’s more advanced, more expensive, or whatever. This is what my research in wine indicates, anyway. But the upshot is the same: if the way a product feels, or tastes, has increasingly little to do with how it’s actually made, that, too, undermines classical consumer behavior theory: if innovation were suddenly frozen, would consumers be any worse off?

Gopnik continues with a few other luddite’s lessons—e.g. candlelight is better than any booklight—and winds up discussing the stable starfish (as opposed to the showy peacock, the Gillette analogy), which hasn’t evolved in hundreds of millions of years:

The variations of abundance die at the moment of crisis, and the old stable dull solutions come to life again. The peacock years are over, and the starfish years begin. The grand lek is over and the big empty is here. The peacock with its tail and buzzing batteries is dying. The starfish, by candlelight, inherits the earth.

I don’t want to spoil Gopnik’s magnificent ending—go buy a copy of the New Yorker (which could certainly use our support) and read it yourself—but I’ll say that he finishes on an uplifting, even moving note. Only the limitless lyrical talent of one of our greatest essayists, perhaps, can bring such misty-eyed depth to what’s really a technical/polemic point: when merits-based competition ends, and companies—wineries, razor-makers—stop innovating on any axis other than the sophisticated technology of persuasion, microeconomics as we know it is doomed.