Do pitchers hit more poorly because they’re expected to? 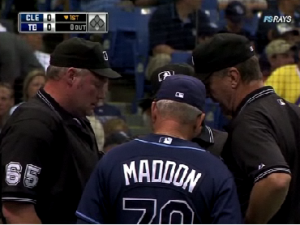 Not funny at the time

Like golf, baseball still has some touchingly quaint pen-and-paper blue laws, and when Tampa Bay Rays manager Joe Maddon signed an incorrectly filled out scorecard for Sunday’s game against Cleveland, the Rays lost their designated-hitter privileges (the American League allows the DH to bat for the pitcher). As such, pitcher Andy Sonnanstine, who shouldn’t have normally had to bat at all, wound up not just having to bat, but having to bat third—the lineup spot normally reserved for the best hitter on the team.

Sonnastine did just what would be expected of a #3 hitter: he went 1-for-3, with an RBI double in the fourth inning. Tampa Bay won the game, 7-5.

Of course, 1-for-3 is hardly evidence of anything. Even AL pitchers get hits every now and then. And maybe Sonnastine also secretly happens to be a good-hitting AL pitcher (there’s insufficient but still interesting evidence of that: he’s 5-for-13—.385—in his career).

But another account (also with insufficient evidence) would be that he was made to feel like a #3 hitter on Sunday, so he performed like one. That explanation would dovetail nicely with the growing body of experimental literature pointing toward the fact that merely sticking someone with a label that has positive or negative connotations—even when that person knows the labeling process to have been completely arbitrary—affects his or her performance on basic tasks, even when he or she has a financial incentive to perform well.

What would be interesting would be an analysis across Major League Baseball of how the same hitters perform when they’re in lineup spots with high expectations (e.g. #3 or #4) vs. low expectations (#8 or #9). You’d have to control for other effects of situation (e.g. who’s on base) and lineup (e.g. who’s on deck). Anyone want to mine the Elias Sports Bureau and check this out?