Counterfeit wine below the radar: the case of Tesco 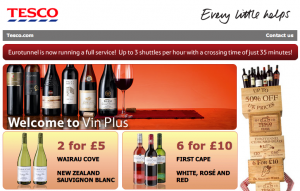 Britain’s Sun recently reported that supermarket giant Tesco sold two bottles of counterfeit Louis Jadot Pouilly-Fuissé, distributed by Hatch Mansfield, to a customer named Danny McGowan of Clacton, Essex, who described the fake bottle as having a label that “looked photocopied.” Apparently, the bottle was on sale for £5, down from a usual £14.49. (As of this writing, the Pouilly-Fuissé was on the price list at the Tesco website for £12.99.)

The Sun article, which was sent my way by the illustrious wine-counterfeiting scholar/economist Günter Schamel (whose work I’ve previously discussed here), has the amusing title “You Plonkers” and an equally amusing photo of a nonplussed McGowan.

The most unusual thing about this story is that while has been much discussion of counterfeit wine in the high-end rare and fine wine market—Jefferson bottles and first-growth Bordeaux and such—there hasn’t been nearly as much talk about counterfeiting in the low-to-midrange wine market.

In that market, the trick might be a lot easier to get away with, for at least three reasons: first of all, evidence from psychology and neuroscience indicates that the end consumers of inexpensive or midpriced wines aren’t probably paying as much attention to the wine’s sensory qualities as they would if it were expensive. Second of all, consumers’ quality expectations are clearly lower when they pay less, so they’re less likely to complain even if the wine doesn’t meet those expectations. Third, and perhaps most importantly, there’s little incentive for any individual to sue for fraud. Unlike, say, wine collector Bill Koch, who alleges millions of dollars in counterfeit damages related to his collection alone—and thus has incentive to sue on his own behalf—even the theoretical smattering of consumers that are more or less certain the wine is counterfeit probably can’t be bothered to raise a big stink over a potential refund (barring punitive damages) of £5 per bottle.

This last phenomenon is the same sort of collective action dilemma that mobile phone companies, credit-card companies, and the like have been trading on for years: they upcharge customers a few cents here and there—rounding the length of a dropped call up to the nearest minute, for instance, or playing with the spread on exchange rates on foreign transactions—but it’s below the radar screen of anyone but the most obsessively litigious or penny-pinching customer. It adds up to a lot of money for the company, but not enough is taken from any individual to incite a lawsuit. It’s thus a highly effective form of fraud.

When there are enough instances of such a scam, plaintiff firms sometimes come after the perpetrators with class-action suits, because contingency fees allow the firms to collect a percentage of the entire settlement even when the payout to any individual member of the class is small. The amalgamated damages then function as incentives for the plaintiff firms that look more like Koch’s and less like McGowan’s, even as many of the plaintiffs themselves probably don’t even go to the trouble to deposit their miniscule winnings (have you ever received one of those 40-cent settlement checks in the mail?).

It might seem, then, that the optimal opportunity for fraud is where (1) the damages to each individual are relatively low; (2) the number of instances is fewer than would make the case worth a plaintiff firm’s time; and yet (3) the business is large enough to make good money for the counterfeiter.

If low-end wine counterfeiting fits into this magical middle ground, then it’s here, perhaps, that sensationalist tabloids like the Sun can serve serve a critical role in the information marketplace and substitute for the plaintiff firm in solving this collective action problem. The tabloid punishes the supermarket chain with a public shaming while also rewarding the whistleblower with fifteen minutes of fame, which may not be worth millions, but whose cocktail-party value, plus perhaps a few pounds for the story, creates enough incentive for a consumer somewhere to tell all. If the story catches on, the extra ad impressions justify the tabloid’s effort. And all of this happens at little cost compared with that of preparing a fraud suit.

Unless, that is, you figure in the Sun’s liability risk if the facts turn out not to be true. This can be a serious matter in Britain, whose libel laws are so friendly to plaintiffs that the jurisdiction is said to attract so-called “libel tourists” from other countries. At least in Britain, then, this sort of middle-ground fraud might have to be particularly brazen and verifiable to be reported in a tabloid. (This one was probably reviewed by the Sun’s legal staff before publication and certified as such, in keeping with the age-old adage that the lawyers get paid no matter what.)

On its face, the Jadot fraud does look unusually brazen, from the apparently not-very-believable label to the fact that, according to McGowan, the wine tasted like Liebfraumilch—an off-dry German wine—when it was supposed to be white Burgundy. Even wine novices are pretty good at differentiating sugar levels, and passing off a sweet wine as dry—if that is indeed what happened here—would be an unusually challenging feat to attempt. But in the world of wine counterfeiting these days, maybe brazenness is no drawback, and the challenge is the game.