Are empty wine bottles on eBay being used for counterfeiting?

One of the most thought-provoking papers at this year’s meeting of the American Association of Wine Economics was presented by Günter Schamel, a professor at the Free University of Bolzano. 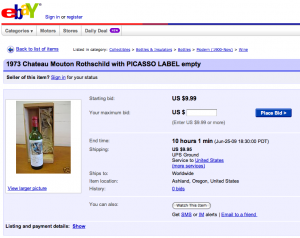 Not empty for long?

Schamel’s study, which is still in progress, has thus far looked at a data set of 260 eBay auctions of empty wine bottles. In his model, the most powerful predictive variable—explaining both the incidence of sale and the final auction price of an empty bottle—is “the price a full and presumably authentic bottle could potentially fetch in the marketplace.”

Schamel argues that this is “powerful evidence that the empty bottles might go on to be refilled. Why otherwise would someone want to pay more than 100 euros for an empty bottle of 1982 Chateau Lafite-Rothschild rated with 100 Parker points? Presumably, because it is worth a lot more once it is filled up again.”

Certainly, notwithstanding a recent incident in which a customer at a London restaurant sent back a £18,000 magnum of 1961 Château Pétrus claiming that it was counterfeit, our wine experiments and others’ predict that few consumers—even wine experts—would be able to identify a plausible fake of ’82 Lafite.

In my mind, the strongest piece of evidence in favor of Schamel’s theory is that his model shows no price effect for the most intuitively collectible of all wine bottles—Château Mouton-Rothschild bottles with artist labels. These are designed by a different prominent artist for each vintage. One might assume that these bottles, when empty—since they’re limited-edition works of art—would have higher value than others if they were being collected for legitimate purposes.

On the other hand, if collecting empty wine bottles is less like art collecting and more like straightforward conspicuous-consumption plumage—that is, if, say, a collector’s display of a row of empty bottles in his or her dining room or wine cellar is functioning as a mere social display of the total value of all the expensive wines that he or she has consumed—then he or she would have an interest in buying the most expensive possible bottles, which would explain the model’s results without the need for counterfeiting. It would be interesting to survey empty-bottle collectors to see, at least anecdotally, what qualities they claim to value most.

It was also brought up in the Q&A session that, to complete his or her work, a counterfeiter would also need an appropriate cork. As few corks are available on eBay, Schamel has not yet investigated a potential cork effect. However—and this is speculation—I would imagine there to still be a robust market amongst counterfeiters for empty bottles without corks, primarily because I’d assume that there is also a separate black market for counterfeit corks (or real corks without bottles) that could complete the sets, so to speak.

I’d also assume that one of the main categories of counterfeit-wine buyers would be conniving restaurateurs in regions where there’s a lot of demand for prestige bottles but relatively little wine tradition or wine education—China and Russia come to mind. I’ve seen a table full of businessmen in Hong Kong order a bottle of 1970 Haut-Brion and mix it with Coca-Cola. Restaurant customers in such situations would be easily duped—and they also might be less vigilant about looking at the cork. Such restaurateurs might take steps, for instance, to avoid presentation of the cork when the bottle is opened.

I’ll leave it at this: if I were going to go into the wine counterfeiting business, eBay would certainly be one place I’d start…