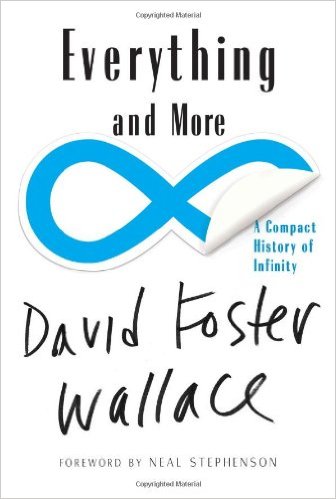 Fewer than five pages into Everything and More: A Compact History of Infinity, which in my opinion is the best thing he ever wrote, David Foster Wallace comes straight to the point about the problem with the field of mathematics as a whole:

“When we use an expression like ‘2+2=5’…we are really saying that two of anything plus three of anything will equal five of anything. Except we never actually say that. Instead we talk about the number 2 and the number 5, and about relations between these numbers. It’s worth it—again—to point out that this could be just a semantic move, or it could be a metaphysical one, or both…In arithmetic there’s the abstraction of number; and then there’s algebra, with a variable being a further-abstracted symbol for some number(s) and a function being a precise but abstract relation between domains of variables; and then of course there’s college math’s derivatives and integrals of functions, and then integral equations involving unknown functions, and complex functions (which are functions of functions), and definite integrals calculated as the difference between two integrals; and so on up through topology and tensor analysis and complex numbers and the complex plane and complex conjugates of matrices, etc., etc., the whole enterprise becoming such a towering baklava of abstractions and abstractions of abstractions that you pretty much have to pretend that everything you’re manipulating is an actual, tangible thing or else you get so abstracted that you can’t even sharpen your pencil, much less do any math.”

There are two things I really like about David Foster Wallace’s style rules. The first is that he uses single quotation marks to refer to terms (or sometimes, ambiguously, as scare quotes), and double quotation marks to quote people (which he does minimally, and paraphrases more often, which I think is more often appropriate given the imprecision of memory). The second is that he uses italics the way they should be uses. And like Wallace, I believe that they should be used, like em-dashes, which he also uses—almost as much as Emily Dickinson did.

Kurt Vonnegut, in the last words of his fourth-to-last book, A Man Without a Country, rails against all of these devices. His biggest objection is to semicolons. I love Vonnegut, and I love that book—even with all of its paranoid ranting and raving. But no em-dashes or semicolons? Fuck that. When you’re writing without emoticons, these types of devices are absolutely necessary. We need them. They allow you to write more like you speak. We don’t need fewer of them; we need more of them.

What Wallace does with all of these devices is to indicate to the narrator in your head that he should change his tone in a way that also changes his meaning when reading the parenthetical phrase. Sometimes this makes all the difference, as when you’re standing aside from a scene and laughing at it with him. Wallace’s choice to use grammatical devices as intended rather than poisoning them with rhetoric, is deeply respectable. It is a gentleman’s gambit. Wallace can be show-off-y, but he is also incredibly precise. I love this, especially when he’s able to maintain it over the course of a 142-word sentence (I counted).

And then, in the midst of this dense, mathematical 142-word sentence, he just happens to throw in the greatest use of the word “baklava” in the history of modern literature. He doesn’t do it for shits and giggles: he does it because there is no other word that could have expressed the idea he is trying to convey more precisely than “baklava.” The stickiness, the flakiness, the nuttiness, the sweetness of honey and the beauty of something that sticks together and somehow works under the most improbable of circumstances.

The fact that Everything and More gets only 3 out of 5 stars on Amazon is proof in itself that star ratings, when averaged, are sometimes of limited value: in this case, the distribution, as is the norm with DFW, is bimodal, with 32 people giving the book 4 or 5 stars and another 24 giving it 1 or 2 stars. This is a real departure from the usual J-shaped distribution of consumer ratings, which is best described by this Association for Computing Machinery article. The reason for this is simple: a lot of people find Wallace to be a pretentious, incomprehensible fuck.

On the other hand, when you read Wallace, there are moments when you can see that side of things, too. Last year, for example, I sent a copy of Everything and More to my grandfather. He was a math professor, and author of the book Fundamentals of Differential Calculus, which he began writing around the time Wallace was born. My grandfather found Wallace’s writing to be so rambling and pretentious that he couldn’t get through more than a chapter or two.

My grandfather is also precise, but beyond this, and unlike Wallace, he doesn’t state a point unless he can state it concisely. He will wait indefinitely until he has decided on a phrasing that is both efficient and effective. To watch my grandfather form sentences, assemble strings of logical propositions, is a beautiful thing. At 97, his sentences come out slowly, sometimes uncomfortably so, but they’re as beautiful as ever. My grandfather can’t so much as follow Wallace’s stoner train of thought, which really is a valid shortcoming of Wallace’s work. I wonder if his inability to reach old and young people better contributed to his loneliness.

So there, in a nutshell, is the case against Everything and More. Here’s the case for it: this book changed my life. It is my favorite book by one of my favorite authors. Wallace was born to write about math, especially the story of professional math. He writes about the weirdos of calculus history, Leibniz and Cantor and Dedekind, like the most awesome possible fly on the wall. Wallace’s voice is made to tell this story because his voice is every bit as precision-obsessed and lost in layers of abstraction as the voices of the thinkers he describes. These are people who create calculus out of their own wild imaginations, and in the process, completely change the course of human history.

Wallace is not the biographer of these mathematicians, many of whom died by suicide or in mental institutions. He is their apologist. Wallace understands and takes on their mental anguish, and connects it in a powerful way with ambiguous struggle of science as a whole. This book fucked me up more than anything else the man has written. For this up-fucking, amongst many other things, I owe him a great debt of gratitude.