Gold frills for the Russians, mighty warriors for the Japanese: on wine versioning 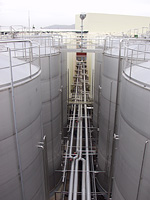 Spain’s Felix Solís Avantis is probably the biggest wine producer you’ve never heard of, pumping out more than 200 million liters per year. The company’s industrial facility in Valdepeñas (in La Mancha, near Ciudad Real) is more or less the Death Star of wine factories. The warehouse alone is the size of an airplane hangar, and it’s so mechanized that there is not a human being inside it: giant, sliding robots whisk the cases from place to place, storing and retrieving vast quantities of wine.

The most interesting thing about Solís, though, is that, according to Ana Escamilla González, the director of marketing, the company actually produces only 10 wines in Valdepeñas, but they’re bottled and labeled under 400 different brands around Spain and the rest of the world. On average, then, each wine gets about 40 different labels, different looks, and different prices. Ms. González told me that the international “presentations,” as she calls them, are created in consultation with local marketing specialists. The Russian bottle, for example, has a warrior surrounded by lots of gold flourishes, while the Japanese bottle, she says, has “the same warrior, but without the gold.”

“Versioning” a product—varying it slightly and selling it under different brand names—is a well-known technique in marketing courses at business schools; among other things, it’s often a way of getting around laws that ban price discrimination. A classic example in the IT literature is the adoption of a device that intentionally slows the page-per-minute speed of a laser printer, so that the company can then sell a so-called “crippled” version of the same printer at a lower price and reach an additional market segment. Tim Harford reports in Slate that IBM did the same thing with the 486 processor: “the cheaper version was the expensive version with some extra work done on the chip to reduce its speed.”

I can’t decide if it’s less brazen or more brazen to employ the technique when the product inside the package doesn’t vary at all. Clearly, this marketing department is familiar with the wine placebo effect. Maybe they have their own name for it. In any case, they probably don’t sit around discussing it—instead, they trade on it.