Have we all been pouring bottled beer wrong? How to pour beer…

Randy Mosher, one of America’s leading experts on the topic, thinks so. Randy’s new book, Tasting Beer: An Insider’s Guide to the World’s Best Drink, was recently published by Storey, which shares a publishing umbrella (Workman) with my own Fearless Critic Media. It’s an excellent book, totally accessible yet technical enough to take readers into some of the basic neuroscience of taste and perception and the chemistry of beer. 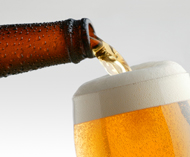 At a recent beer-tasting event held at the Workman headquarters, Randy told me that, generally speaking, bottled beer should be poured straight into the dead center of the glass, not into a glass tilted at a 45-degree angle, as is popularly believed. When beer is poured into a tilted glass, Randy argues, the head never fully forms, and you miss out on the beer’s creamy introduction.

True to his word, in Tasting Beer, Randy describes how beer should be poured for judging at a competition: “Pour the beer right down the middle of the glass, wait for the foam to settle, and if needed, pour

The late beer critic Michael Jackson seemed to agree with this generally, although he dissented in the case of ales, which he preferred without too creamy a head. In Ultimate Beer, Jackson writes (of pouring ales): “A gentle, steady pour down the side of the tilted glass will stop the beer from foaming excessively. Steepen the angle and pour more directly to avoid the beer being too flat. Aim for one ‘finger’ of foam. Too much creaminess will rob the beer of its appetizingly bitter character. The hop oils will migrate from the beer itself and hide in the head.”

Mosher and Jackson agree that German-style weizens (wheat beers), which have high levels of carbonation, are an exception to any pouring rule. Writes Mosher: “The traditional method of pouring will amaze and astound your friends. First, rinse a very clean glass with clean water. With the glass in one hand and the bottle in the other, invert both at a steep diagonal angle. As the glass fills, keep the neck of the bottle just above the level of liquid in the glass. If you do it right, you’ll get a full glass with foam right up to the rim. If you do it wrong, well, you may find yourself mopping beer off the table. The final step is to take the near-empty bottle and roll it back and forth on the table, then pick it up and dribble the yeast in a circular motion on top of the foam, where it will melt through and create a cascade of cloudiness through the beer.”