When are high wine prices justified?

In wake of some of the latest chatter about The Wine Trials 2010 (this one from Joe Briand, wine buyer for New Orleans’ excellent Link Restaurant Group, e.g. Cochon, Herbsaint, with a response from Wine Spectator executive editor Thomas Matthews), I thought it was time for a quick clarification of first principles here. 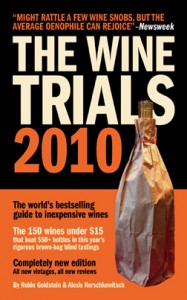 Rather, my basic points are these:

(1) Evidence has shown that most everyday wine drinkers (not wine professionals) don’t prefer more expensive wines to cheaper wines in blind tastings. This is separate from the question of whether the properties of expensive wines are aesthetically superior in the minds of experts.

(2) Many (but certainly not all) expensive wines, such as the luxury brands from LVMH—which are advertised much like the group’s TAG Heuer watches, De Beers diamonds, Guerlain perfume, or Louis Vuitton handbags—are overpriced because such a large portion of their cost base is spent on marketing. This doesn’t just go for superpremium wines like LVMH’s Château d’Yquem, Krug, and Dom Pérignon; it also goes for brands like Cloudy Bay, a straightforward New Zealand Sauvignon Blanc whose price—without any apparent change in the production method—rose from about $15 per bottle to about $30 per bottle after LVMH acquired the brand in 2003 and began marketing Cloudy Bay as a luxury product.  To me, when the consumer dollar is going more toward advertising than toward materials or production, it’s a paradigm case of overpricing. It bothers me that the mainstream wine media doesn’t take brands to task for this.

(3) There are also wines that are overpriced for reasons other than marketing—reasons like an irrational premium Bordeaux bubble that’s being inflated by indiscriminate demand from rich, unsophisticated consumers in emerging markets like China and Russia. Even if Pétrus spends no money on marketing, $5,000 is an irrational price for a bottle, and this is a demand-side phenomenon.

(4) Then there are the producers who model themselves after Pétrus in an effort to capitalize on that same demand-side phenomenon. These producers make “high-end” wine (with the characteristics typically associated with the 95-and-higher-point wines in wine magazines, e.g. aging in new French oak, high alcohol, extreme concentration) and price it as such. Here, there aren’t necessarily the extreme marketing expenditures of LVMH; rather, there’s simply a price-signalling play: the hope that positioning the product at the top end of the market will speak for itself, and that consumers in search of a luxury good will buy into that notion. In this case, the consumer dollar isn’t paying for lots of advertising and marketing—it’s just sustaining unconscionably high profit margins for the producer.

What situations (2), (3), and (4) have in common is that the cost of production of each of these premium wines is virtually unrelated to the street price.

One might divide wine pricing theory into two rough schools of thought. There is the camp that believes wine should be priced from a supply-side/cost-plus perspective–you take the cost of production of the wine, you add reasonable costs and a modest profit for the producer, you factor in markups for distribution and retail, and you arrive at more or less what the wine should cost. The other camp believes that wine should be priced from a demand-side perspective–that a wine is worth whatever the market is willing to pay for it.

The reason I’m in the first camp, and not the second, is that I don’t subscribe to the neoclassical model of consumer rationality upon which the demand-side pricing theory is built, a counterfactual universe of stingily hypersensitive, quality-sniffing consumers. My sense is that, especially when it comes to hazy markets like wine, real human beings—within certain constraints—generally anchor themselves to market prices that are imposed upon them, and generally pay for things what they’re told those things are worth.

One attempt to justify superpremium wines with modest costs of production is an opportunity-cost-of-land argument—that wine in the Champagne appellation is so expensive that the opportunity cost of that land can justify higher prices. I’m unsympathetic to that argument, because real estate prices track market wine prices, so the price of land is not an independent factor.

So when are premium prices justified in my camp?

When the cost of production is high. The fact that Matthews and Briand mention 1er Cru Burgundy and German whites as examples of expensive wines worth the money suggests that they might be in my camp too, because these are particular examples of wine regions in which grapes are often harvested from small plots with very low yields. In the case of German TBA, for instance, the harvesting is often done on steeply terraced slopes that are extremely difficult to work. Ice wines and botrytized wines—the priciest of German whites—are indisputably more difficult and expensive to produce than almost any other type of wine.

In short, while spending $50 or $75 or even $100 on a good Sauternes, TBA, or top red Burgundy might not always make economic sense for the buyer—particularly if it’s a buyer without much experience in wine—it’s at least justifiable from a supply-side pricing perspective. The $150 you’ll pay for a bottle of Opus One or Krug, meanwhile—never mind the $5,000 you’ll pay for a bottle of 2005 Pétrus—has little to do with the cost of production.